A Visit to Baltimore 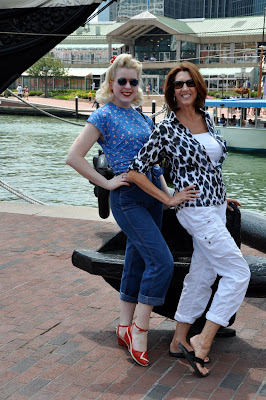 I just returned from a trip to Baltimore to visit my aunt who has been kicking cancer butt for over a year now. Since she’s been doing so well, we felt a girls celebration was in order—my mom (her big sis), my big sis, and one of my cousins all traveled to her home to spend a few days together. I hadn't seen my aunt in almost three years, and it was really good to visit with her and the other family members. It had been too long between visits, that's for sure!

Now, it was excruciatingly hot and humid in Baltimore—even though I’ve lived in the desert for most of my life, I’d forgotten how unbearable humidity can be. It’s the kind of weather where even lounging directly in front of the air conditioner is tiring—not to sound too cliché, but I’d take our 100+-degree dry heat any day!

We did get a chance to visit the Inner Harbor on one of the days we were there--of course, after approximately five minutes outside, we were dying from the aforementioned humidity. Seriously, we were wilting as soon as we stepped out of the car! (Note: Leaving the house at noon during the summer is probably not the wisest choice. Thank goodness for well-placed ice cream stands!) After wandering around for a little while, we decided to check out the Baltimore aquarium, since it promised not only fantastic fish, but also fantastic air conditioning. This proved to be a good move, although we were surrounded by what seemed like thousands of children running around. (Note: Visits to aquariums are probably more enjoyable when not going during school vacations ;-))

Anyway, here’s a couple of pics from that day (taken by my sis)—the first is with my lovely cousin, hamming it up in front of the USS Constellation, and the second is front of the USS Torsk, a WWII-era submarine. 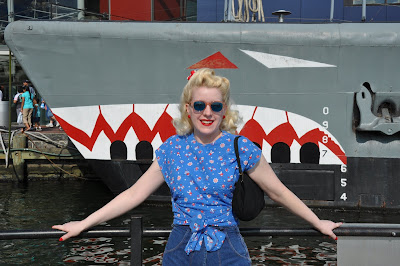 I dressed for our waterfront adventure in a blouse made from a 1940s pattern and WWII-era nautical print seersucker. I'm totally okay with thematic dressing!

And for fun, here’s a photo of the local “wildlife”! 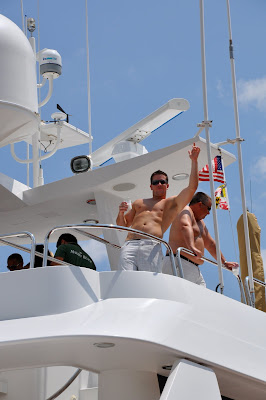 Posted by Jitterbugdoll at 8:06 AM 12 comments: 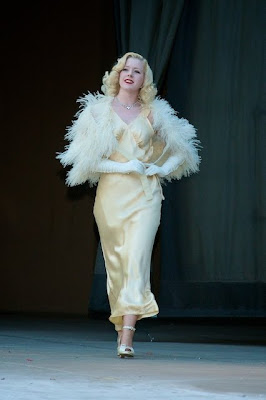 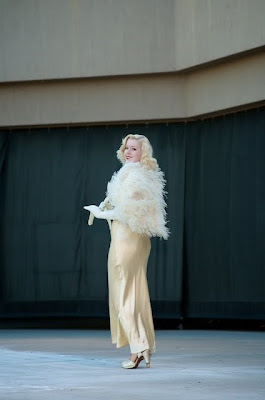 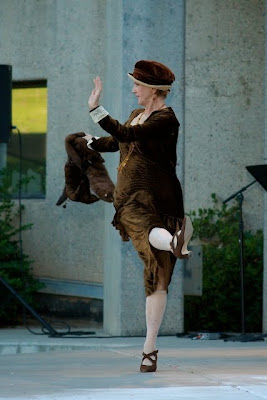 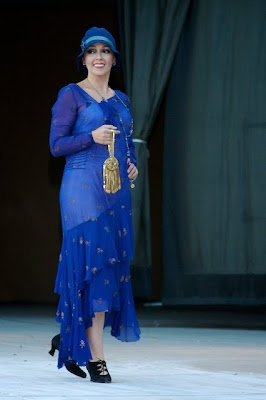 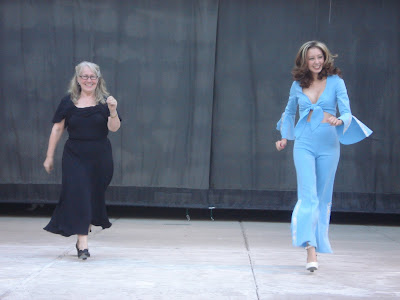 Co-owner Rose showed off her Hustle skills with one of the models in this wild 70s look.
Posted by Jitterbugdoll at 9:21 AM 14 comments:

Tea Time Across the Atlantic 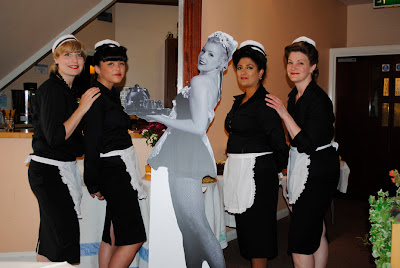 Just got a couple of pics back from the most recent Vintage Vogue fair, at which I made a guest appearance in the form of a life-sized cutout (photo taken by Atomic Age Pictures)! I hope to attend in person someday, because the pics I've seen all show the most drool-worthy vintage items! 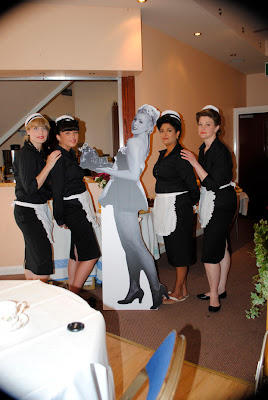 Stephen and Michele put on a fine fair, and Michele knits the most wonderful sweaters as well. I'm especially taken with this model: 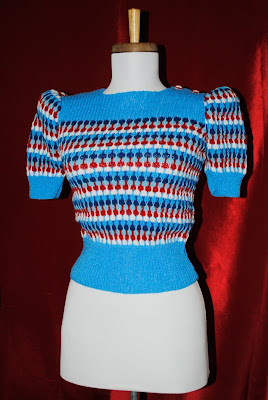 Did any of you attend this event? If you did, I'd love to hear about your finds! 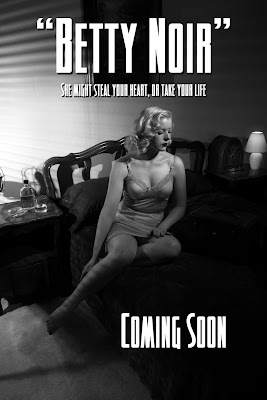 A little preview for the latest project I am working on with Doug Monce of Atomic Age Pictures. More to follow soon! 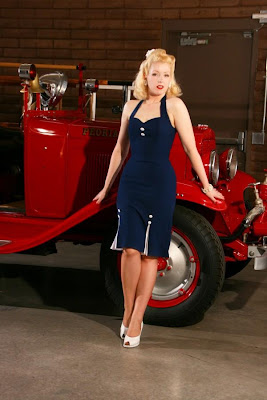 Today's entry really puts on the heat, but that's understandable--wiggle dresses and fire trucks are a fiery combination!

I'm wearing a dress made by the fab OuterLimitz, and thanks to a nice fireman, our backdrop for the shoot was a 1929 fire truck (interesting piece of trivia--this is the original fire truck the city of Peoria purchased. It sat on the back lot, slowly decaying, for many years before finally being restored to it's original glory.) Sadly, I didn't get to pose with any cute firemen, but I think that can be arranged for another day ;-) 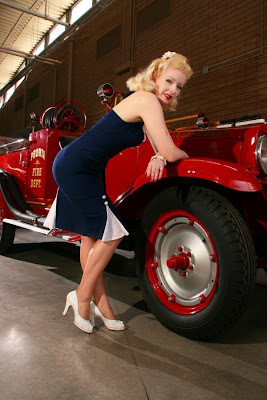 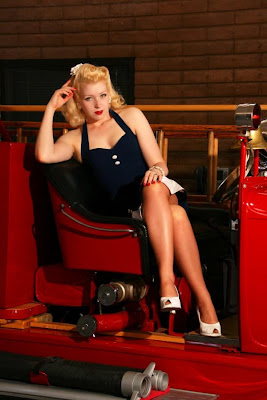 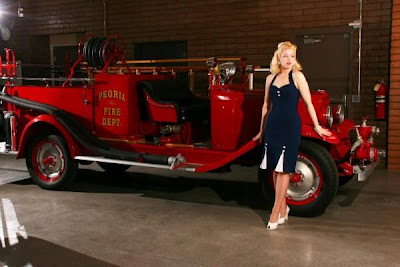 Posted by Jitterbugdoll at 6:29 PM 14 comments: 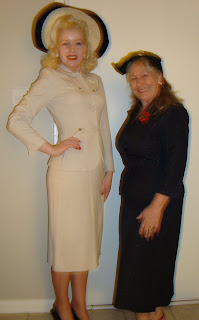 Tonight's fashion lecture at the Phoenix Art Museum was entitled "Adrian: The Iconic Suit". Given by fashion historian Jane Trapnell, it extensively covered Adrian's life and career, and I definitely learned some interesting things about this amazing designer! In honor of the subject matter, my dear friend Rose and I dressed in our best forties suits. I apologize for the slightly blurry photo; it was the only one that mostly turned out (still figuring out the camera settings after all this time, sigh) but I wanted to share it with you anyway.
My 1940s-suit has western-inspired details and was mistaken for an Adrian by the historian--I am certain the designer was influenced by him! I accessorized with nude fully fashioned stockings, navy 40s platforms, a cream straw portrait hat trimmed in navy felt, and carved bone earrings (the suit and earrings came from Rose's shop, Matilda's Closet.) I'm also wearing a Scottie pin engraved "Bob 1941."
xoxo
Amanda Lee
Posted by Jitterbugdoll at 9:33 PM 8 comments:

A short clip from Friday's show, filmed by Twisted Manga--I'm wearing a 1940s sarong style dress in navy and yellow tropical print rayon (an early Matilda's Closet find of mine), along with sand-colored linen 40s heels, a yellow fakelite bracelet, and a pink and yellow double hibiscus in my hair.

I hope you enjoy it!

Posted by Jitterbugdoll at 8:59 PM 3 comments: