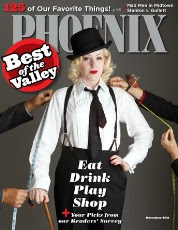 A few weeks ago I worked with photographer David Zickl on a project for Phoenix Magazine; we had been hoping that our photo might make the cover, and I'm pleased to say that today I found out it did! David had been given an assignment to shoot one of the winners of the magazine's "Best Of" awards, and since he'd been given the winner of Best Tailor (Scottsdale's Fifth Avenue Alterations) he had the idea to style a model like Charlie Chaplin for the shoot. I'd actually worked with David a couple of years ago, when he photographed MacAlpine's Soda Fountain for an issue of Arizona Highways, and he contacted me to see if I was up to his latest challenge. Of course I said yes, and after being outfitted in proper Chaplin attire by Matilda's Closet, we shot our glamorous take on "The Little Tramp".